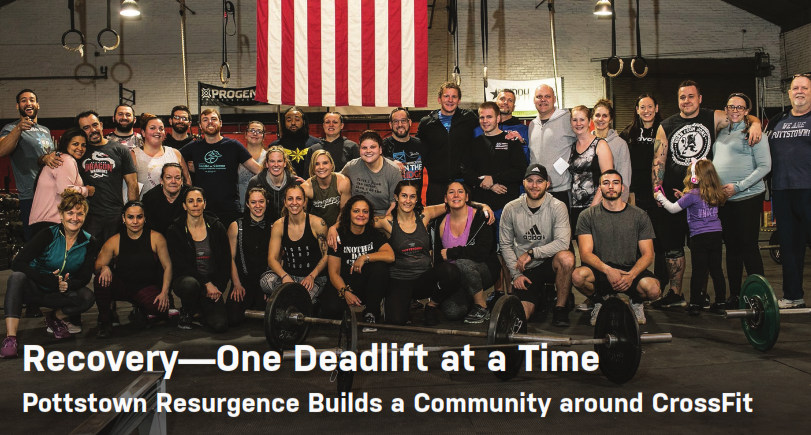 For most of us, our workout routine isn’t a matter of life and death, but at CrossFit Pottstown Resurgence, the stakes are higher.

“I would not be alive today without this place. I truly feel that deep in my soul,” said Sam Calvanese, who had tried several other recovery programs without success before finding her way to Pottstown Resurgence—a program offered by Pottstown Athletic Club, or PAC, free of charge to individuals working to overcome drug and alcohol addiction.

Since 2014, the program has offered free CrossFit instruction at the Armory in downtown Pottstown three times a week to those recovering from drug and alcohol addiction, in addition to hosting a weekly meeting where participants talk about addiction and the range of accompanying physical and emotional issues.

“I’ve been to a lot of meetings over the past years, but this is by far the most helpful, most meaningful that I’ve been to,” said Calvanese, who now coaches and mentors at Resurgence. “Most of us struggle with anxiety, depression, eating disorders—and we can talk about all that here so it’s a really nice safe place. It’s life changing.”

Rob Matthews, owner of PAC, sees a strong link between breaking the cycle of addiction and engaging in physical activity alongside others who understand the struggle. Weekly meetings were designed as a way for participants to articulate what they were going through.

“It’s the best meeting in town,” said Matthews. “You’re all pumped up. Your endorphins are going. Your brain is active. You want to share, and that makes the meeting that much better.”

Over the years, Resurgence has built a community among individuals who’ve shared in the same struggles.

“When I first came here I was only a month and a half out of prison, and I felt like I had nobody and nothing in the world but my family,” said Ryan Ziegler, who has been a part of the program for over a year and is now a certified CrossFit coach. "I’ve been able to grow with it solely because of the people. They allowed me to come in when I wasn’t talking to anyone or doing anything. It’s everything I needed.”

For both Calvanese and Ziegler, coaching has provided a sense of purpose as they help guide others through recovery.

“I was given an opportunity to give back. Even though I had only been in the program for a few months by then, I knew I wanted to help,” said Ziegler. “There are days when only giving back—doing that right thing—is going to keep you on the right path. That’s where coaching comes in so great for all of us.”

The program goes well beyond the workout of the day to address changes to lifestyle that add up to building healthy outcomes.

“Not only was I an alcoholic, I was 420 pounds at one point. So I was going to die from the cheeseburgers or the alcohol,” said Ziegler. “For me, when I got clean, I had to change everything about how I was living.” 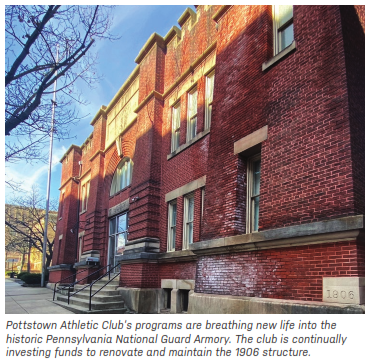 Improvements are underway at the Armory to support that element of Resurgence. The club is currently renovating the meeting area and adding a kitchen to the space.

“Everything is running and functional. I just have to put a floor down,” said Matthews. “Nutrition is key to all of this. Especially with individuals coming out of recovery, they’ve got to eat right. So we’re going to run nutrition classes out of here.”

Since 2013, the Pottstown Area Health & Wellness Foundation has partnered with Pottstown Athletic Club to provide programs that support not only those in recovery, but anyone in the Pottstown community looking to live more active lives. Most recently, the club received $75,000 in the fall 2019 grant round to help support fitness programming for the entire community.

“We never turn anyone away,” said Matthews. “Let’s say a young kid comes to the club and wants to join, but can’t afford it. What I would do is talk to the parents and say ‘what can you afford?’ If you can’t do $65 a month, let’s do $35 a month. If they can’t afford anything, they’ll help with cleaning or we’ll barter. That’s the foundation of where it started.”

Matthews noted that the universal appeal of the club’s CrossFit training allows coaches to connect with individuals and families regardless of experience level, age, or fitness.

PAC has gone above and beyond the goal of building a more active community, training world-class athletes to compete on the global stage. The club’s dragon boat paddling team, Pottstown Dragon Warriors, trained several local athletes who went on to compete at the International Dragon Boat Federation World Championships in Pattaya, Thailand. The specialized facilities at the club draw dragon boat teams from up and down the East Coast to visit Pottstown for training excursions.

For members of all the club’s programs, it represents something special— something unique to Pottstown.

“It’s an awesome program,” said Calvanese. “I don’t know of anyone else who has something like this, but it’s working.”

Any questions call Rob 484 302 9950 or email This email address is being protected from spambots. You need JavaScript enabled to view it.